Nordkapp – not the Top of Europe

So you want to ride to the top of Europe? Nordkapp isn’t it – but you can still reach it. 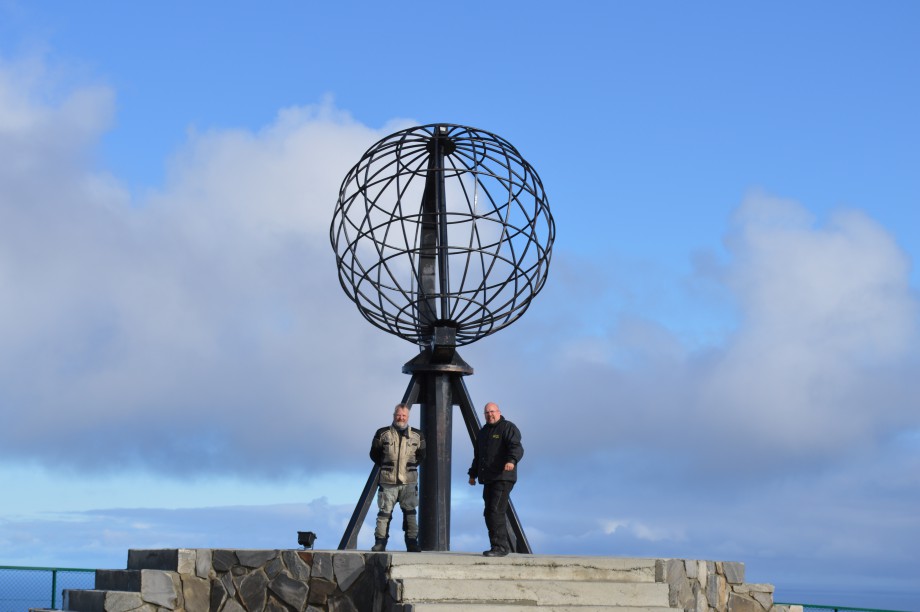 The classic Nordkapp picture. But you are not on top of mainland Europe when you’re standing by the Globe.

After many adventurous miles on your motorcycle, you finally reach your goal. The North Cape – Nordkapp. You park your bike and wander along the path leading to the plateau and ask a fellow tourist to take a picture of you beside the famous Globe. You are on top of the world. On top of mainland Europe. Only – you aren’t.

But even if we accept that Magerøya is a part of the mainland, Nordkapp (N 71° 10’ 21”) is still not farthest to the north. Actually, it is Knivskjelodden (N 71° 11’ 08”). Knivskjelodden is a small peninsula west-northwest of the Nordkapp plateau. It is nearly 1.500 meters further north than the plateau itself, and you can see it when you stand by the Globe.

The good thing is that Knivskjelodden is reachable – but you’ll have to walk there. Some 7 kms south of the plateau,along the main road, you will find the starting point of a marked walking path leading to Knivskjelodden. The path is 8 kms long and will take you some 2 hrs to walk.

It might seem like quite an ordeal, but hey – how often are you on the real Top of Europe?

Standing by the Nordkapp globe, Jon is pointing at Knivskjelodden, where he actually has been.

We want to see yours!

Posted on February 19, 2015 by HansP@RideNorway

We want to see YOUR Image of Norway!

Jon captured this image on his way from the North Cape. He really wanted a pic with his Triumph in front of these racks that is used to dry fish. An Image of Norway.
Photo: Jon Whitmore (2012)

If you have been to Norway on your bike, I am sure you have a picture that defines your experience of this country. Now we want to see it! Just that one picture that you think is the quintessence of your ride here: Was it that sunny night at the North Cape? Was it the rain and fog in Bergen? Maybe when you encountered snow beside the road over one of the mountain crossings? Whatever it is, we really want to see it! Wherever you’re from, Norway or abroad – let us see it.

Send it to me for posting on http://www.ridenorway.com, or post it directly on the Facebook page. A few details regarding your pic would be welcome too.

We’re all looking forward to your Image of Norway!

Even the camp sites in the Lofoten Islands are magnificent. Is this how you picture Norway? Photo: Jon Whitmore (2012)